With Tanzu Community Edition v0.11, the contributors brought FluxCD in the app manager that comes with TCE (kapp). Mind you it was only the Flux Source controller which is the one that keeps track of the changes made in a Git repository and pulls the resources. Deployed by itself it isn’t much use as there is nothing in the cluster to bring the resources defined in the git repo into the cluster. Sure you can install flux yourself in a jiffy but the point here is to use the TCEapp catalog. In version 0.12 (rc1 as I write these lines), the kustomize controller was added into the mix, making the whole thing a lot more interesting. I recently wrote about GitOps when I moved my home automation stuff to a private GitHub repo that is reconciled by ArgoCD. The most obvious difference is that FluxCD doesn’t have a nice UI like ArgoCD so it is not as intuitive and visually appealing as ArgoCD but it is efficient and has other strong points. You can find the differences between the two products in this blog.

If a lot of these terms like GitOps or FluxCD make no sense to you, you can always refer to the documentation where you will find a lot of information about how the different components work and interact between each other.

In this blog, we are going to deploy a Tanzu Community Edition unmanaged cluster, install FluxCD using the app manager and configure a Git repository to watch. Note that this is not production ready as I am using an unmanaged cluster. Also there is no Helm or notification controller (yet).

You can install the Tanzu CLI manually or using Homebrew. I have Brew installed but this time I downloaded the v0.12rc1 release from the release page using wget, unpacked it and then installed it on my linux machine with ./install.sh.

I am using WSL and Docker for Windows which works quite well. However there is a condition where managed clusters have issues with docker on Windows so I stuck with unmanaged clusters for this blog as I don’t have access to my vSphere lab just now. However it doesn’t make a difference for the purpose of this writing.

Let’s start by deploying an unmanaged cluster. This step is super easy as the whole bootstrapping process is automated by the Tanzu CLI. A TCE unmanaged cluster is simply a single node cluster running in Kind with the Tanzu bits installed on top of it, so no cluster API provider involved here. The prerequisite is of course that you have the Tanzu CLI installed and Docker running.

Your kube context should switch automatically to the newly created cluster. You can then run commands against it like listing the nodes.

kubectl get pods -A

At this point you have a Tanzu Community Edition unmanaged cluster running, how easy was that? 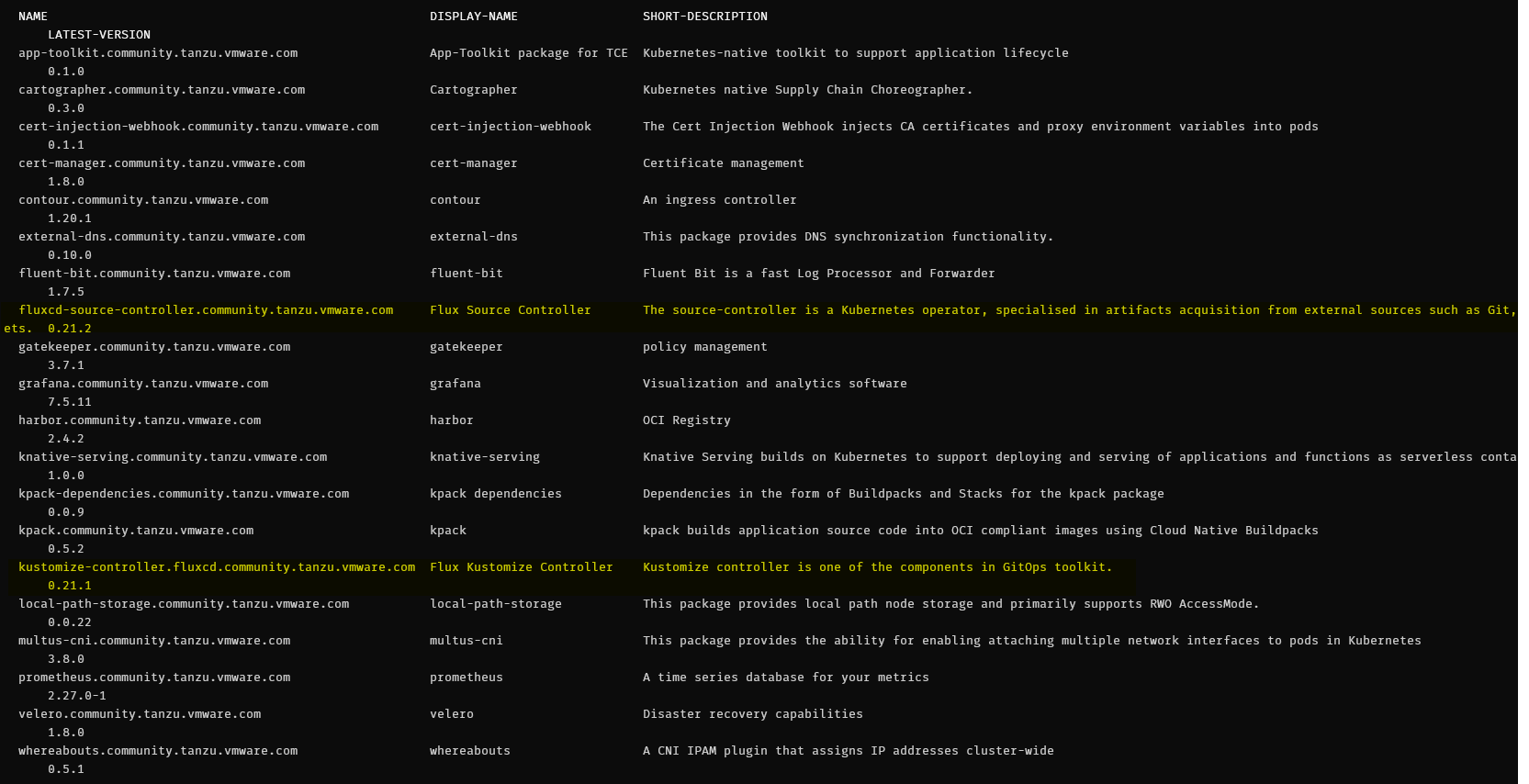 The role of the FluxCD source controller is to watch a repository (Git, Helm or S3 bucket) and pull the resources (artifacts) locally for controllers to consume (among other things).

The role of the FluxCD Kustomize controller is to reconcile the cluster state from multiple sources provided by the Source controller (among other things).

You will find that a namespace has been automatically created for each controller. However, note that the FluxCD operations we’ll do later will happen in the flux-system namespace.

You can also look at the custom resource definitions (CRDs) that have been added to the cluster. Those are what extend the Kubernetes API to understand what FluxCD works with, for instance, a source such as a Git repository.

kubectl get crd -A | grep flux

Anyway, now that FluxCD is installed in our cluster, it is time to configure it. We first need a location to store our manifests so I created a dummy public GitHub repository at https://github.com/vxav/test-gitops. Next, in our cluster we will create a source that points to this repository and a kustomization that specifies where to look for manifests.

Make sure that you are pointing to the right branch. I set it to main but you may want to use another one. Also the public documentation is still referencing master which is being replaced by main. Note that you can add more advanced settings to your sources but we’ll stick to the basics here.

Pretty straightforward as you can see. Note that you will want to install it in the flux-system namespace as this is where the FluxCD controllers look (by default anyway). I changed the interval to 1 minute, specified the URL of my repo and the main branch.

You can list your FluxCD sources by looking for the CRs (Customer Resources).

Here, the kustomization will tell the FluxCD Kustomize controller where to look for manifests to apply. For the sake of this demonstration I will set it to the root of the repository but this isn’t what you would do in production. If you want an idea of a solid GitOps structure, you can refer to this public GitOps template repository provided by Giant Swarm to manage Cluster API clusters in a GitOps fashion. This would be even more relevant for Tanzu Community Edition managed clusters.

I gave it a silly name and put it in the flux-system namespace. Path is an important setting as it is where it will be looking for resources to reconcile. in SourceRef I specify the FluxCD source that I created earlier.

Again, you can look at the CR that was created.

Out very basic GitOps structure is now ready and all that’s left to do is to add resources in our GitHub repository for FluxCD to reconcile. Reconciliation refers to the actions to make the cluster state match the desired state.

If the flux command line tool is not installed in your machine, refer to the Flux documentation to install it. 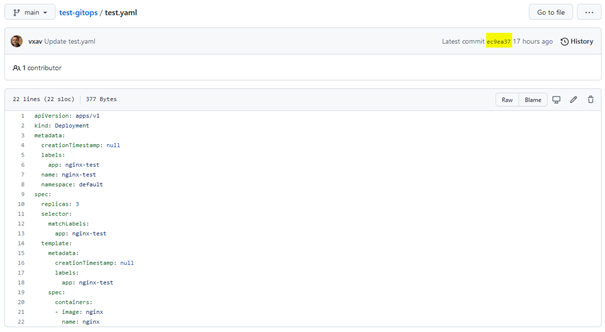 As you can see the kustomize controller picked up the commit ID.

The nginx pods defined in our deployment should automagically appear as the manifest was retrieved by the source controller and applied by the kustomize controller.

Now you can play about with it, for instance I will change the number of replicas in the Git repo from 3 to 1 and push the change.

The kustomization should be picked up as before.

The deployment will be scaled down and we should end up with a single pod in our deployment.

And that’s it, we now have a Tanzu Community Edition cluster which resources are managed in a basic GitOps fashion by FluxCD.

We discovered how to use the Tanzu app catalog to install FluxCD and manage or Tanzu Community Edition cluster in a GitOps fashion. While setting this up for a basic use case like this one is easy, it is that, a basic use case. Production environments will need to consider important factors such as secret encryption (FluxCD works well with Sealed Secrets and SOPS), private repositories, monitoring, lifecycling…

Note that I referred to the FluxCD resources with CRDs a lot but you can also use the flux command line to manage Flux. You can display sources, kustomizations, logs, you name it it’s all there.

It is pretty cool to see the direction Tanzu Community Edition is taking and I hope the rest of the FluxCD components will be added to the list in future releases.