I did this project to create a mood lighting behind the TV that “follows” the colors displayed on the screen and enhance the experience of movie watching. It is pretty much an open source version of Philips’ Ambilight except it can work on a wide range of devices and is much cheaper (with a little bit of hardware and some elbow grease).

Sorry for the poor quality of the video but iPhone + low luminosity doesn’t work that well. Click the gif for the full version on youtube.

The system is made up of 4 main components. I won’t get into the details of the raspberry or the TV as I assume you already have your media center running Kodi.

Here are the different components of the system and what they do.

Hyperion is an open source Ambilight implementation under MIT license. It is the software that controls the LEDs according to the colors detected with a clever algorithm. There are other similar projects such as Boblight but I chose Hyperion as it seems to be the best.

Lightberry is the hardware bit, based on an Arduino Leonardo, that acts as an interface between Hyperion and the LED strip. Lightberry offers multiple devices and packs that offer a different level of integration. In this tutorial I am only focusing on the USB converter. There is a version with a GPIO interface as well but I already have a case that closes the top of the raspberry. You could also do without the lightberry part by using the GPIO pins 19 and 23 for clock and data (See end of article for details).

This converter alone will only make the LEDs work with the Raspberry PI. If you have other devices that you would like to integrate like a DVD player or a Xbox and such you will need and HDMI switch and an HDMI splitter as well.

My OpenElec is on version 6.0.3 and runs Kodi 15 on a Raspberry Pi 2, at the time of this article you can get a Raspberry Pi 3 with a better hardware for about £30.

They must be individually addressable, meaning you can control the LEDs independently (color, intensity). Each LED is equipped with a micro controller, with which hyperion must be compatible. There are several types. The main ones are APA102 and WS2801, I chose the WS2801 for no real reason as I have no idea what the difference is between the two but they both seem to work well. The controller is not always visible like on the APA102, but you can check wether it is independently addressable with the labels on the strip. 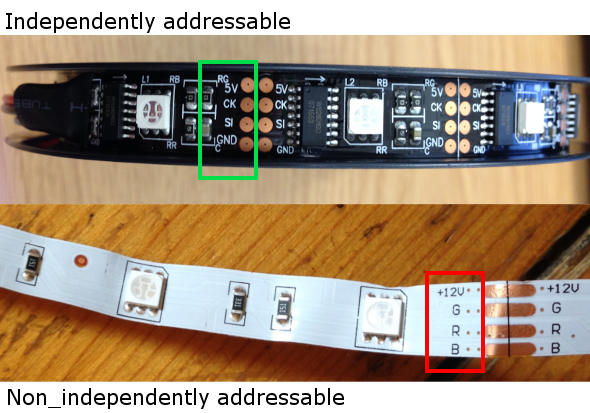 I got my leds from a cheap chinese seller on amazon and I had issues with the LED strip which had the connector badly wired, so I had to redo it by desoldering and resoldering it properly, not ideal. Even though it works now it took me some time to get to figure out what was the issue, so going for the cheapest one might be a bet.

You can get the whole lot directly as a kit from lightberry. It costs about 90€ and contains everything you need. Lightberry HD Kit

Download/install these and store the lightberry firmware somewhere on your pc.

I had an issue with a bunch a LEDs flickering like crazy all the time that is fixed by updating the firmware of the lightberry, so here it is.

Follow this tutorial from lightberry to update the firmware : http://update.lightberry.eu/

Scroll down to the end for the alternative without lightberry.

When you order the kit from lightberry you get a bunch of hooks to run the led strip sideways without using the tape on the back and the need to cut the strip at every angle. If you don’t get it there is a bit more work involved but it’s worth the time spent and costs almost nothing.

You will need to cut 4 lengths of strip for each side of the TV.

The glue on the back of the strip isn’t the best ever and the heat of the TV doesn’t help, so I added a few ugly bits of tape to secure the led strip. 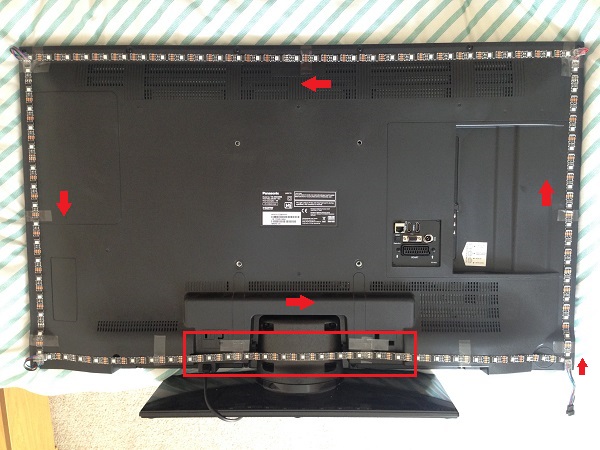 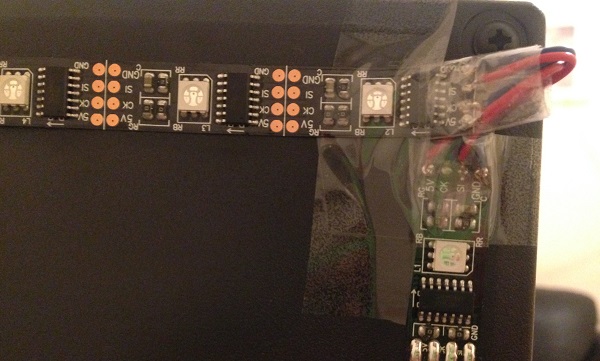 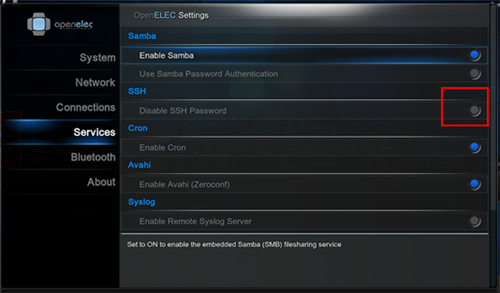 If you don’t enable the remote control, Hyperion will fail to connect to Kodi and won’t be able to switch off the leds when you don’t want them (Menu, screensaver, pause, …). 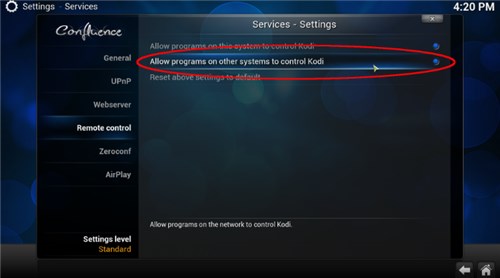 Creation of the configuration 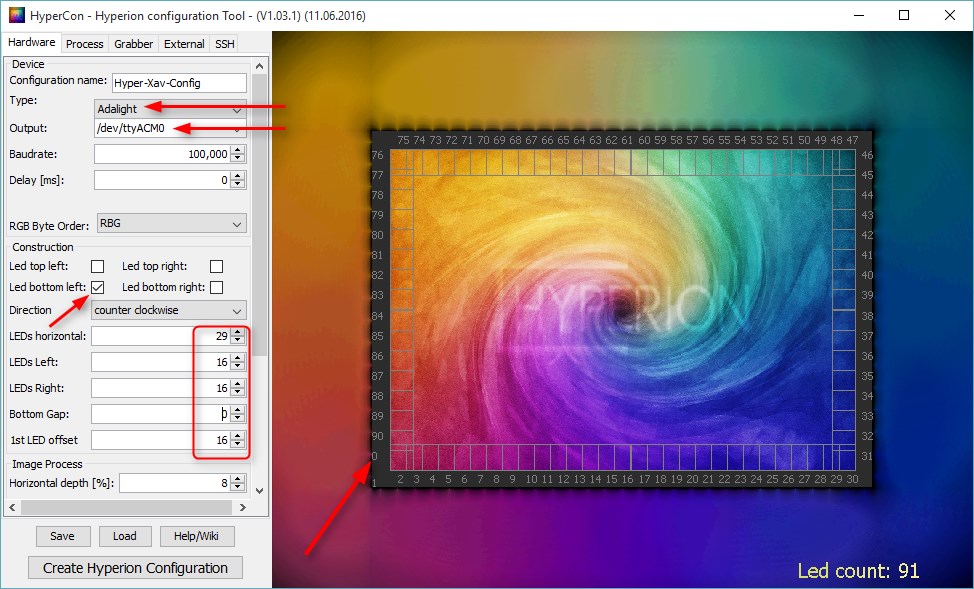 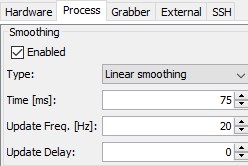 Skip the grabber tab as you shouldn’t need to touch anything there.

Kodi checker allows hyperion to get the status of Kodi.
This is why we enabled the two checkboxes earlier. 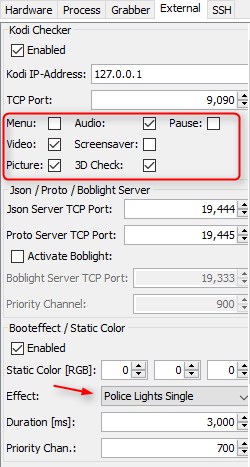 installation of Hyperion and push of the config

If it worked you should see the boot sequence that you chose in the external tab (“Police lights single”).

Now check the colors with the color picker (choose it and click “Set led color”). The main ones you want to check are red, green and blue.

If they are inverted you need to recreate the config file after changing the order in the hardware tab under “RGB Byte Order”.

For example, if your leds are blue when you choose red and vice-versa, change RGB to BGR.

By far the most annoying part of the setup, the color calibration. It isn’t easy to tell when the color is true or when it is blueish or greenish, but doing it might give better results.

When I did the calibration I realised that my green was off and I had to add 50 “red” in the green to get it right.

You can follow the tutorial made by the Hyperion guys.

Something pretty cool as well is to control your LEDs with your smartphone. You can set a fixed color or play the preconfigured effects, I use it a lot as a ambient light in my living room. 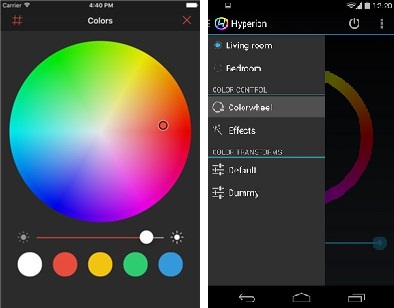 Link to the apps:
iPhone
Android

If you want to use the GPIO pins instead of the lightberry converter, it will be globally the same process with a few exceptions.

Led strip connection to the GPIO:

Power supply to the LED strip:

Then you will need to get all of this nice and tidy with connectors, heat shrink and wires. The rest is essentially the same.