In the event of a PSOD (Purple Screen Of Death) ESXi will try to save a core dump of the vmkernel and a screenshot of the console screen, which can be crucial for diagnosing the root cause of the failure.

First of all the vCenter must be configured to accept the files through the Network Dump Collector Service. The Dump Collector service for Windows is packaged in the vCenter 6.0 and doesn’t have to be installed on the vCenter one but in most cases it will be. I installed mine on my vCenter as I couldn’t think of any purpose splitting them would serve, adding an extra layer of complexity.

It is very likely that the Dump Collector was already installed with vCenter but if, for some reason, it wasn’t or if you want it to be on a separate box, you will find the installer in the vCenter media in CD:\vCenter-Server\Packages\VMware-Netdump.msi

The configuration is done in an xml file located at the following path (edit according to your VMware installation folder):

The interesting tags to configure will allow you to tune a few settings of the network core dump service.

Path to the directory where the logs of the service are stored, I use a log folder on a data disk.

Path to the directory where the actual core dump files are stored, I use a data folder on a data disk.

Amount of disk space in GB that can be used for it, I set 4 (which is too much) because I have plenty of space.

You can configure the UDP port to use (default 6500) that you will need to adjust according to your network/server configuration. This setting, along with MaxSize can be configured in the webclient as well in Services>ESXi Dump Collector.

Save the file and close it.

Now we need to set the Network dump collector service to start automatically on vCenter. In the web client go to Administration > System Configuration > Services > VMware vSphere ESXi Dump Collector.
Note that you must be logged as sso admin (administrator@vsphere.local) to get the services view.

Then click action > Edit startup type and set it to automatic. 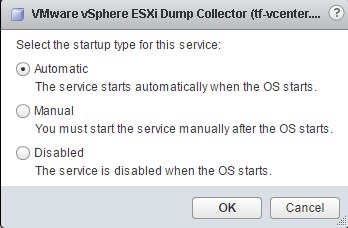 Start or restart the service from the action tab.
You can still check on windows if the service vmware-network-coredump is running but it should be.

Configuring the hosts using powerCLI is only a few commands away. It is usually configured with esxcli directly on the host’s console or via SSH but the good thing in doing it in powershell is that you can include it in a configuration script for example.

Let’s use the new Get-EsxCli V2 that came with the version 6.3 R1 of PowerCLI.

If we look into the arguments variable we will find the properties that we can use.
Note that “enable” can only be used if it is the only property of the variable. You can’t configure the anything and enable at the same time.

We now need to enable it.

To verify that the host has been configured just run a “get” then a “check”.

The output should contain the values that you configured your MyArgs variable with.

To verify the communication with the Network coredump service on vCenter.

The output should say “Verified the configured netdump server is running”.

Better save the configuration with a

And that’s it, now you just have to wait for your host to burn! 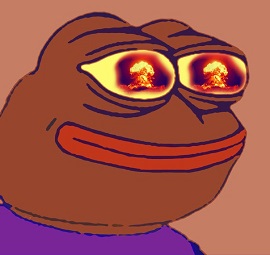